Jea pun sudah ready when I got back.  And she had half-recovered from the mild fever. Double Alhamdulillah. Lepas aku packing lebih kurang, off we went to the train station. Before tu sempat singgah bank & withdraw duit sebab poket si Err makin nipis. Pinjam kad Jea, I didn't bring any card with me (hatta IC pun). Bijak kan??

Mengalah sama Jea, was supposed to have the middle berth tapi sebab minah tu still unwell I took the upper berth instead. Still, unaware of the consequence later that night.

Right after departing, I went to the washroom to get changed. Didn't take any pictures of the water dispenser & toilet / washroom as they look the same as in the previous train we rode. Jama' atas katil jak, tabahlah kena duduk+bend 40' sebab memang ndak boleh duduk tegak. Then, dinner. 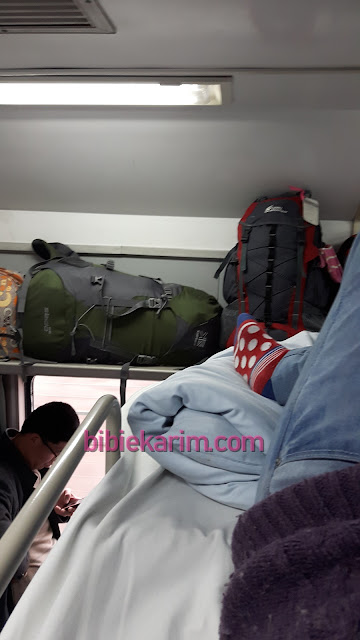 Later, sempatlah chit chat sama mamat sebelah katil. He's from Beijing, and he speaks good English although having learnt it only in the university. He never get the chance to go outside of China. Tapi gigih practice his English skills; every time jumpa foreigner he will try to talk to them.

Actually...I was already sweating & starting to feel nausea & dizzy. Signs of claustrophobia. Yes, you read that right. Confined place suffocates me. And maybe, he noticed that hence he started talking to me. Just to get me distracted. Alhamdulillah it worked. We talked about a lots of things, well it's literally more to him 'explaining' about China & its people. Me = listening side; which I enjoyed because I got to know a bit more about the Chinese i.e why they are always in hurry; something I've been pondering ever since I arrived in China. He wished me good night after seeing me yawning few times. Not that I was sleepy honestly, but that's me being me. Memang sejenis habit menguap bila malam+atas katil walhal bukan ngantuk betul pun.

Anyway, I can't remember what time I drifted to sleep. Sebab sempat edit gambar bagai lagi malam tu. What I know, I woke up in the middle of the night. Panic attack! I remember vividly how I crawled to the end of the bed, and mouth breathing. I was gasping for air. Heart pounding.

I went back to sleep not long after that. Super sound asleep. We arrived Jingmen Station 30 minutes passed 5am.

So untuk next destination, I'll continue in next entry.