Our 8th day in China. Alhamdulillah the night before tidur lena. Walau tidur a bit late than usual, I woke up early. Bersemangat sebab tempat tujuan harini was the 2nd highlight of our Xi'an trip. Actually aku yang excited aktiviti Day 2 ni. I've been aiming to go here since I found out about this place few years back. So sila lah faham keterujaan sis. I stopped few times while updating this entry; suddenly got the urge to layan documentary of this museum in youtube. And later, sambung layan The Mummy: Tomb of The Dragon Emperor pula. Perangai betul.

That morning, while I was getting ready Jea told me that she wasn't feeling well. Few days of cold weather (and snowing in between) has taken its toll on her. She excused herself from going to the museum. And so it's gonna be a solo journey for me to Terracotta Army Museum; located around 1.5 hours away from our hotel.

From Fangzhicheng Bus Station take the tourist bus line 5 (306) which will take you directly to Terracotta Army Museum. Fare is CNY 5 (~RM 3.00).

The Terracotta Army in Xi'an or also known as Terracotta Warriors and Horses, is a super large collection of life-size terracotta sculptures in battle formations, reproducing the mega imperial guard troops of Emperor Qin Shi Huang (259 - 210BC), the first emperor of the first unified dynasty of Imperial China.

The Terracotta Army was discovered in 1974 by accident; by farmers digging a water well during the dry season. At first, he taught he had dig a hidden temple. Which was already bad news. And if it's a grave, that will be even worst as that will ruin the locals fengshui (in other words; gonna bring bad luck). What they didn't know was that's actually the most important archaeological finding in China for the past hundred years.

In fact, it is one of the most extraordinary discoveries. Further excavation works soon find more terracotta shards. All smashed after being more than 20 centuries underground.
I walkertapaki from where the bus dropped me; to the ticket counter. And walked for another kilometer to reach the terracotta museum. I purposely skipped the Emperor's mausoleum & Lishan Garden.

There are 3 pits that have been discovered (as of 2016); and the archaeologists believe there could be more than just 3 pits because the area is estimated to be approximately 98 sq/km. It is massive.

Praise be to The Almighty for giving me the opportunity to set my feet upon this land. Bagi peluang tengok semua ni depan mata, and learned lots of things from this place alone; amin amin.

Pit 1 is a combined battle formation of charioteers & infantrymen. At the end of the eastern end of the pit are three row of vanguards. Immediately behind them is the main body of the battle formation. Around the outer edge, there is one row of soldiers facing south, north & west respectively as the flanks to guard the sides & rear of the army. 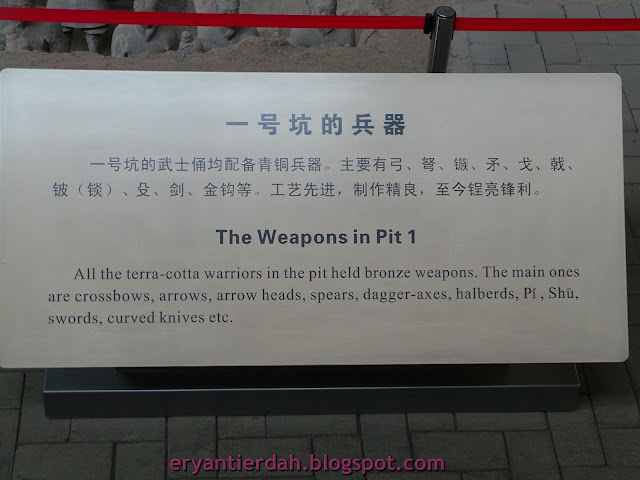 Not a single army are identical; they were constructed to be unique. The figures vary in height according to their roles; even their ear lobes are distinct (further explanation of this in the documentary I watched).
Subhanallah. The technology used is beyond imagination. Bayangkanlah all those pottery warriors, horses, weapons etc still intact. Ada lah few yang pecah & berderai, sebab sudah di underground tu nearly 2,000 tahun kan. But most of them masih utuh. Kukuh. 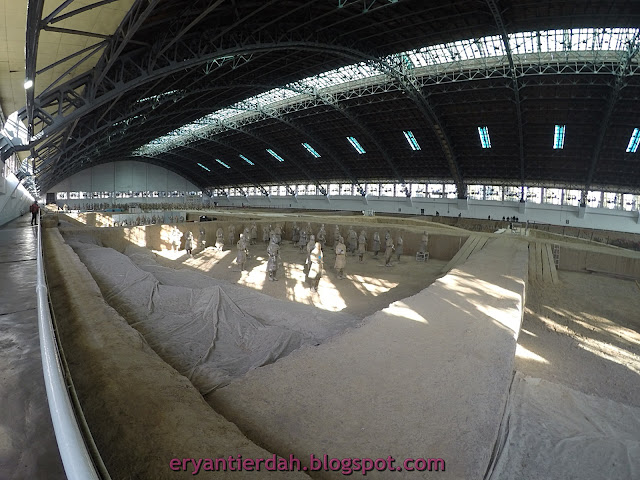 
Very little information (almost nothing) about the Qin Empire until the Terracotta Army was uncovered. How was it possible to combine all those technological knowledge, resources & manpower needed; and to do it quickly...are among the questions raised about Qin Empire.

Qin Shi Huang was the first emperor of China. He started modest by ruling Chin; a small state with big ambitions to conquer all its neighbors. 200 years before the rise of the Roman Empire, he ruled China.

Why did he built the Terracotta Army?

Qin unified China; he took those disparate states with different languages & writing systems; and forced them all BE CHINESE. But, Qin was also a cruel tryant. Thousands of people suffered & died under his regime. He's been accused of massacring prisoners of wars, burning books & slaughtering his critics. He believed even if he died; he still carry his life in the underground kingdom. Hence he built the necropolis where he brought everything he had during his life; to the underground kingdom. Qin believed spirits of his many victims would seek revenge in the afterlife, therefore he got the Terracotta Army buried to combat any threat from the underworld. The revenge will be blocked by the immortal force of his ever loyal bodyguards.

Behind those great armies & administration; Qin was actually a mere human being. Still fear of the afterlife, fear of the people he once tortured. 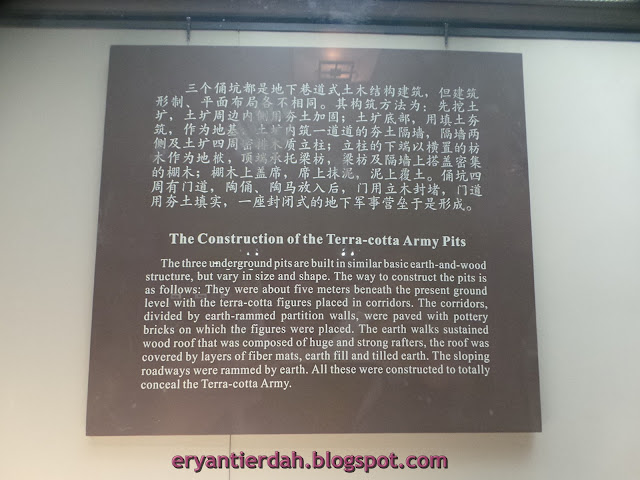 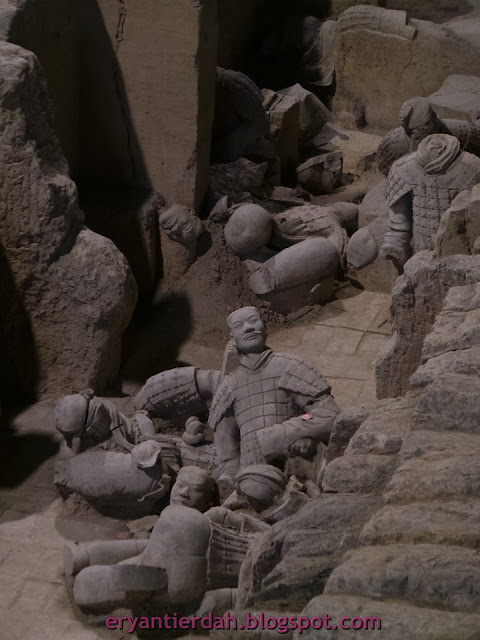 The Terracotta Army are life-sized figure. They vary in height, uniform, & hairstyle accordance with rank. Even their body armors vary depending on rank, function & position in formation. 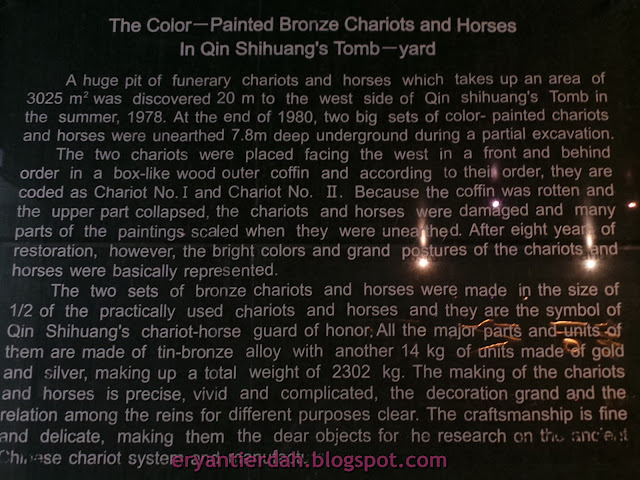 I can go all day & night talking about this place. Sejenis suka sejarah. Gitu pengakuan.

I know this is too long an entry. Mainly doing it for myself; and to those who loves history as well. I kinda enjoyed reading my old posts, simply to refresh my memories & cherish them. Also to remind myself how fortunate I am to be given the opportunities to see the world. Because sometimes I tend to forget about all those rewards from Allah & start complaining the 'hardship' He bestowed upon me. Sigh.

Walking out from the museum to the bus stop was sort of pain in the neck. I have to walked passed rows & rows of shops / restaurants. Adalah dalam 20 mins. Didn't stop by any shop as I was chasing time. I need to be back to the hotel by 3pm (luckily check out time was that late). And I need to pack my things as we're leaving Xi'an to another state that night.